The positive Coronavirus test result first came on June 17th and since then it’s been an exhausting battle for Tyrone Rodgers. The minutes turn into hours, those hours into days. Some days are good, while others are just plain awful.

The former Winnipeg Blue Bombers defensive lineman measures his progress – such as it is when battling this virus – when he manages a series of consecutive good days in his recovery.

“Today is a good day,” began Rodgers in a conversation with bluebombers.com on the weekend from his home in Los Angeles. “Last week was the first week where I had four good days in a row, and that’s how I count them. Then I got sick again last Thursday. I was really tired and my oxygen level was low, I was dizzy and couldn’t stand. And then Friday and Saturday were good days.

“But this virus is just not something you can plan for and there’s no plan of attack. When it’s a good day it’s almost like I don’t even have the virus. Some of the symptoms I just chalk up to everyday things. Like right now my voice is going away a little bit, but I consider this a good day. I’m not having any dizziness. There are days when my body feels so tired I can’t even get out of bed I’m just that exhausted.

“It’s a battle. I get up every day and hope it’s a good day. And when it’s not I just figure out how to battle it.”

A gritty, tough-as-nails defensive tackle, Rodgers played 11 years of professional football after a college career at Oklahoma and Washington, including being part of the Huskies’ 1992 Rose Bowl championship team.

Undrafted, he signed with the Seattle Seahawks in 1992 and played in 37 games over the next three seasons before joining the B.C. Lions in 1996 and then the Bombers in 1997. He had his best season as a pro with the Bombers in ’99, registering 48 tackles and leading the team in sacks. He spent two seasons with the Toronto Argonauts and retired after suiting up with the Calgary Stampeders in 2002.

Now 51, he’s taking an athlete’s mentality in trying to beat the virus. 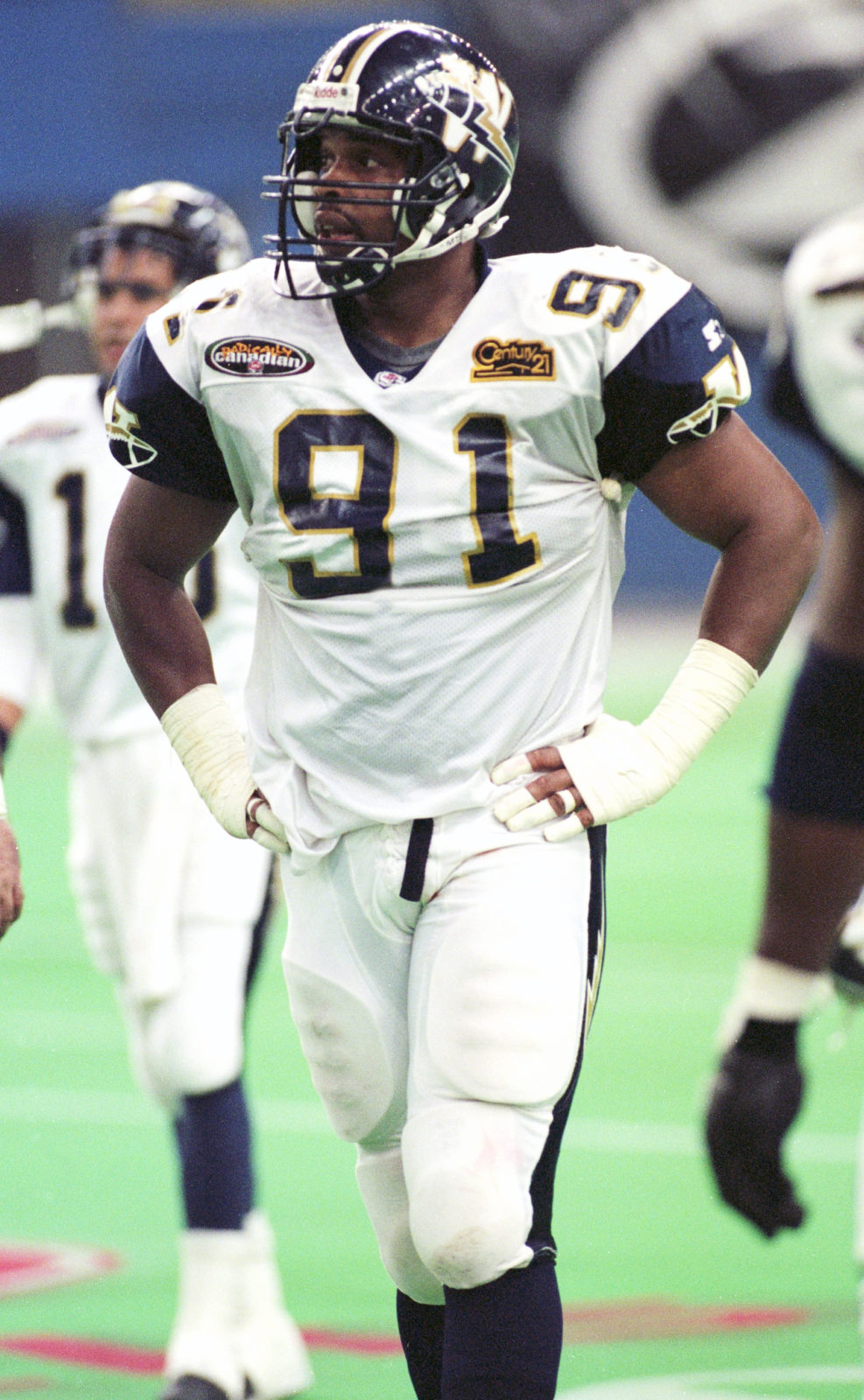 “That’s the only way I can go at this,” said Rodgers. “With my doctors and advisors I have, we’re attacking it like it is a pneumonia or really bad asthma attack. That’s how we’re approaching everything. I’m open to new things. I listen to everybody. I am attacking it. But it’s a different battle for each person every day.”

The battle has come with sacrifice and hardships. He is quarantined and by himself – away from his girlfriend, his 16-year-old daughter Samara, 18-year-old Jhai, who is autistic, and his two older sons Jordan and Na’Ty. Na’Ty, you may recall, was in training camp with the Bombers in 2018 and spent part of last season on the club’s practice roster. He has since joined Paul LaPolice with the Ottawa RedBlacks.

“Everybody has had to get out of the house. I am here by myself,” he said. “My girlfriend and her family will come by and drop things off. We have a way of hanging out where they’ll sit out on the driveway and I’ll open up my garage and we can keep a distance and talk a little bit. Or I’ll just open my window and we can talk.”

Rodgers can’t pinpoint exactly how or when he contracted the virus, but does have a best guess. An avid walker – he walks each of his four dogs separately at night to stay active – he had been diligent in wearing a mask and gloves while using hand sanitizer frequently.

“It’s just weird, the only time I can think of where I was not protected was one night I was walking with one of my dogs and didn’t have my mask on,” he said. “It’s scary because I only came across three people in a park, a huge park with a track around it. If that’s when I got it, it just proves how airborne this virus is.

“I had none of the normal symptoms they keep talking about at first. I didn’t have a cough, I didn’t have a fever. And then I woke up and it was like I was full-fledged sick and I couldn’t get up out of bed. I was just laid out. I stayed in bed almost 24 hours. Then I got the energy up to go get a test and found out the test was positive. This is a struggle.”

Rodgers worked as a corrections officer following his retirement and has since started a very successful security firm – Rodgers Security Service – that provides security to celebrities from Dr. Dre and Snoop Dogg and at events like the Coachella music festival and the Women’s Tennis Association event in Indian Wells, the BNP Paribas Open.

He remains close friends with Blue Bombers hall of famer Robert Gordon, who reached out to Rodgers on behalf of bluebombers.com to see if he would do an interview on his battle against the virus.

“I appreciate you reaching out,” he said. “I’m going to keep battling this. It’s so hard to fight because you don’t know what to fight. This is something I wouldn’t wish on my worst enemy.”