There was a nervous excitement in Kelvin McKnight’s voice, a tone that comes after nailing a job interview and then waiting for the official thumbs up from the big bosses. The Winnipeg Blue Bombers had officially wrapped up 2021 training camp when the 24-year-old Bradenton, FL product was asked to sit down for his first media Zoom session.

He spoke of the camp grind, which began with online meetings while in quarantine and then on-field work on July 10th. And when he was asked what it would mean to him to make the team – he was working with the starters on Thursday – his answer was heartfelt and provided a glimpse as to how impactful the decision could be for him.

“It would be a blessing because I’ve been through a lot this past year,” said McKnight, who spent a year on the Denver Broncos practice roster before being released late last July. “ I know what it feels like to still do everything right and still get let off. Just to be here to be in this position with this opportunity, I’m just thankful for Winnipeg for giving me a chance to showcase my talents. It would mean the world to me and my family.”

Blue Bombers head coach Mike O’Shea said Thursday that the players in camp did everything they were supposed to do. First and foremost that means popping of the page to make the coaches’ decisions difficult. All Canadian Football League teams, FYI, must make their final roster decisions by 9 p.m. Friday. Game day rosters will feature 44 active players, one player on the reserve list, and teams can carry an additional 10 on the practice roster, plus three Global players and also those placed on the injured list. As well, teams will have a five-man CFL taxi squad this season. 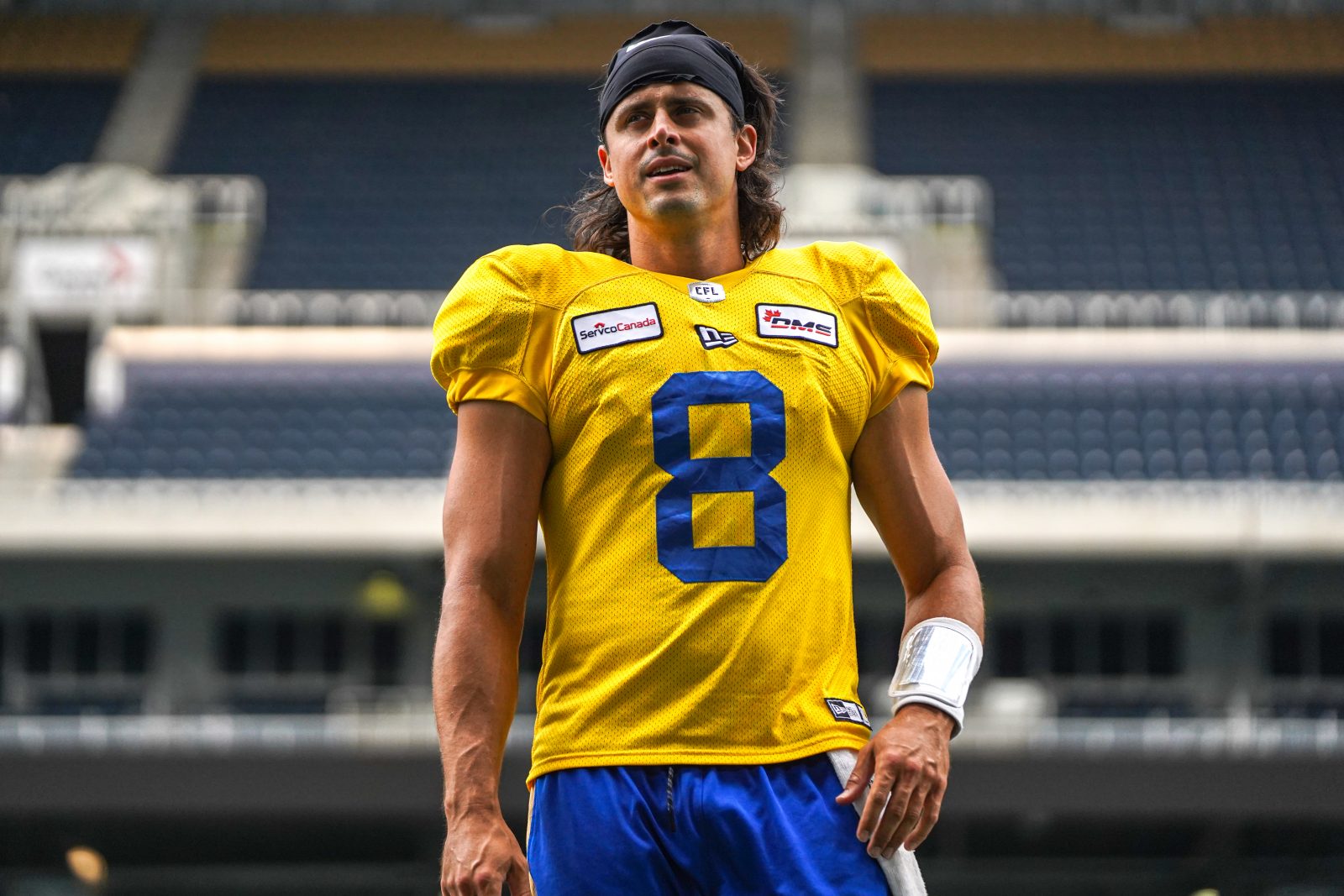 McKnight said his goal was to show his versatility – his ability to play multiple receiver positions – and to have the quarterbacks trust that he knew his playbook. To that end, he drew praise on Thursday from Zach Collaros.

“I think he’s had an unbelievable camp,” said Collaros. “Physically he’s got all the gifts and when he’s out there… he was out there with the one unit (starters) today and he has been a couple times during camp, and you don’t have to worry about him knowing his splits, him knowing what play it is.

“I feel comfortable with him as the quarterback and I think those guys out there having to work with him on the outside do too. I think he’s had a great camp. I think he’s a great person and he holds himself to a high standard. I don’t know what’s going to happen, but I’ve really enjoyed getting to know him the last three weeks.”

Still, until the word becomes official these are nervous moments for anybody trying to crack a squad. It turns out Collaros had those emotions even after having established himself as a starter in this league.

“I can see it, I can feel it,” said Collaros of the tension near the end of camp. “I think I felt that way my first three or four seasons in the CFL. I was always thinking to myself, ‘What can I do after this if they cut me? What’s my next move?’ And I was starting and I was still ‘What if I have a bad camp?’ That’s probably some stuff I have to deal with on my own end, but…”

Surviving the final cut is just the first step, of course. Then the grind only cranks up further as players look to hang on to their spot, either on the roster or in the starting lineup. But a player can’t worry about that hurdle until the first is cleared.

“You do build relationships with a couple of these guys, but it’s a business,” said defensive end Willie Jefferson. “My first year being a professional (with the Houston Texans in 2013) the very first meeting I had the head coach (Gary Kubiak) told us, ‘Look to your left, look to your right… in a couple of weeks this guy may not be here. So get to know him and build a bond with him.’ That’s just the business.

Survive this cut and players who had been in the University of Manitoba Bisons dressing room, or using temporary lockers can begin to settle in to the main Bombers room. And that’s no small thing, akin to landing your own cubicle or office after the most competitive job interview on earth.