It’s right there at the front of Richie Hall’s defensive playbook – a message he preached loudly, clearly and daily to his Winnipeg Blue Bombers defensive unit in 2019: ‘Start Fast, Finish Strong.’

There were many storylines to the 2019 Grey Cup campaign, from the Zach Collaros trade and his impact on the offence, to Andrew Harris standing tall on the championship Sunday, to the end of the longest title drought in franchise history.

Still, the work of the defence through the three-game playoff run last November left an indelible mark on the Bombers’ 2019 championship. And we’ll detail one last defensive highlight today in the final instalment of our ’10 Plays That Made A Champion’ series.

“We were the best team at the end, when it mattered,” said Hall in a recent chat with bluebombers.com for this series. “And in the playoffs, who didn’t play well? Who didn’t make a play?

“In championship games sometimes they say this person showed up or that person showed up. Tell me who didn’t show up to play. In the Grey Cup, man, they came ready to play from the opening whistle until the last snap.” 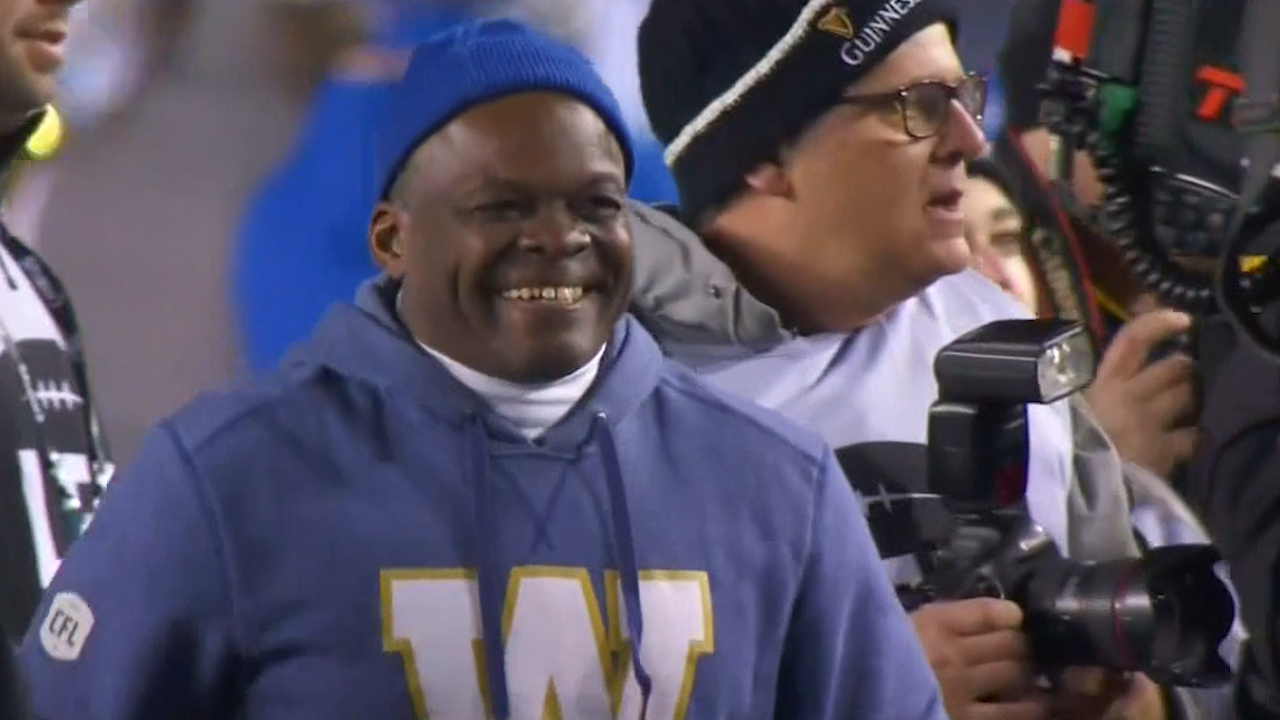 Some numbers to consider over the course of the last three games a year ago – wins in the West Semi-Final, the West Final and the 107th Grey Cup – before we get to our 10th play:

Highlighted previously were the three-interception performance by the defence in the West Semi-Final victory, the goal-line stands in the West Final, and Willie Jefferson’s strip sack/Adam Bighill fumble recovery in the first quarter of the Grey Cup.

Ending the series is Jackson Jeffcoat’s strip-sack and fumble recovery with 5:28 left in the fourth quarter of the win over Hamilton – a play that set the offence up on the Ticats’ 24-yard line and led to a Justin Medlock field goal, the final points in the 33-12 shellacking.

The work by Jefferson punctuated a performance that saw the defence register six sacks, force three fumbles and pick off Evans twice on a day in which the Ticats spit up seven turnovers.

“We just beat them up, straight up, in getting off the ball,” said Jeffcoat. “It was a bit personal that week for us. They came to our house and beat us (33-13 on September 27). They beat us bad at their place when their No. 1 quarterback went down ((a 23-15 loss in late July in which Jeremiah Masoli was injured). I took offence to that. That was kind of the attitude we had throughout the playoffs. We had let Sask beat us. We got Calgary later in the year, but they had beaten us earlier.

Interestingly, Jeffcoat had been battling flu-like symptoms all week, to the point that his roommate – Jefferson – was helping him with Vitamin C and pedialytes while the two hung out in their room between practice sessions and meetings. 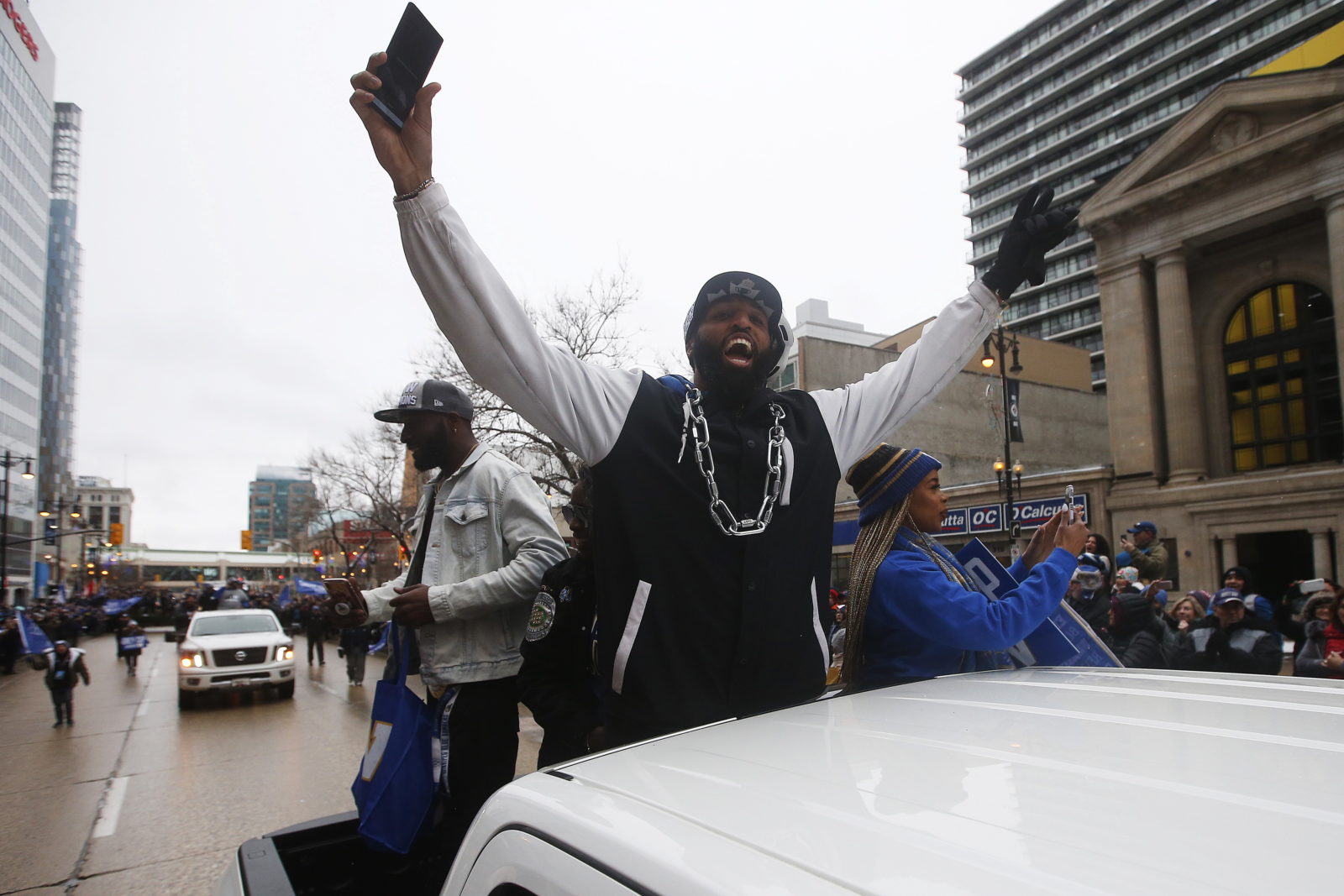 “By the time game time came he hadn’t completely shook it, but the adrenaline and the desire to make plays and not let his teammates down, he really shook it off,” said Jefferson. “When the game started he was back to being Jackson.”

Jeffcoat finished the day with four tackles, a tackle for a loss, two sacks and the forced fumbled – which he recovered – in what might have been his best game as a Bomber.

And it was during the club’s prep work that the defence made some adjustments for what they would do up front. In their previous meetings, the two losses, the defensive front had run a number of twists and stunts in an effort to create mismatches and open up gaps in the Ticats’ O-line.

But in the Grey Cup, the plan changed.

“They have a great offensive line,” said Jeffcoat of the Ticats. “We said that rushing straight up works to our advantage, so let’s just rush and if (Evans) runs, we’ll chase him. Just beat the man in front of you, don’t worry about the stunts. We started studying their tendencies more and more and they were always doing the same thing, but dressing it up differently.

“Once we got up on them, all the stuff they were doing to dress things up is out the window because they’ve got to throw the ball. That’s when we said let’s just be relentless.

“On that particular play, I saw Dane Evans getting ready to throw and I thought, ‘This is perfect. This is the perfect time to smack him.’ When I see him go back I thought, ‘Alright… I’m going to go ahead and get that ball, too.’ I stuck my hand out to try and prevent him from throwing it and it actually hit the ball. That’s when I thought I had a chance to pick it up, too. It was cool.”

“That’s what Richie has preached since I’ve been there,” said Jeffcoat. “We improved in every game in the playoffs. To me, that was what was amazing about the run – we held the offences to less points in each game. That’s when you know it’s true about defences winning championships.

“We were firing everywhere – linebackers, secondary, D-line. And, of course, our offence was going off. They were pounding it. We won it at the line of scrimmage because we were owning people. It was perfect Bombers football.”