Those who have visited the Sistine Chapel in Rome insist part of its beauty comes from the totality of Michelangelo’s work, from the murals on the ceiling to ‘The Last Judgment’ on the altar wall.

Those works by the iconic Italian painter were completed over two periods, from 1508-12 and later from 1535-41.

We know what you might be thinking… thanks for the trivia/history lesson here, buddy, but what in the heck does this possibly have to do with the ’10 Plays That Made A Champion’ series?

Here’s the thing: in putting together this series on the Bombers’ championship run last November we could have easily selected 10 plays from the defence alone – heck, make it 20, 30, 40 – from the three playoff wins.

For the record, the series features five plays on offence, four on defence and one from special teams – all of which will be detailed through to the end of this feature at the end of November.

But the entire work of the defence throughout the playoffs – not just on Grey Cup Sunday, but in the West Final and the West Semi-Final – was simply sensational. In essence, their performances over those 12 quarters was, in one word, a masterpiece.

We’re focusing specifically today on the second goal-line stand by the defence in the 20-13 West Final win over the Saskatchewan Roughriders, a combination of three plays with the Bombers backed up against their own three-yard line with less than three minutes remaining.

“So much of those short yardage plays are about will,” began Bombers middle linebacker Adam Bighill in a chat with bluebombers.com. “Every inch matters in those situations and the price you have to pay for every inch is astronomical.

“I mean, if I’m an offensive guy I’m thinking there’s no way we should ever lose a third-and-one. That’s what our offence firmly believes, especially with the guys we have up front. At the same time, on defence you have to have expectations, too. We all bought in to what those were. When you have the right guys, the right buy-in and the right effort, good things happen.

“I still think the offence has the advantage, but our mindset was we were going to make it extremely hard for them to think about those decisions because we had proven to make people pay.”

The two goal-line stands in the West Final game were massive not just because they helped protect Winnipeg’s lead, but because they both came in the fourth quarter.

Worth noting: there would also be two short-yardage stoppages in the Grey Cup win over Hamilton, coming against a Tiger-Cats offence that had not been stopped in those situations ALL season.

In the win over the Riders, the Bombers were twice backed up to their own goal-line and what is impressive about both stands – again, the totality thing – is how many players stepped up to make plays. 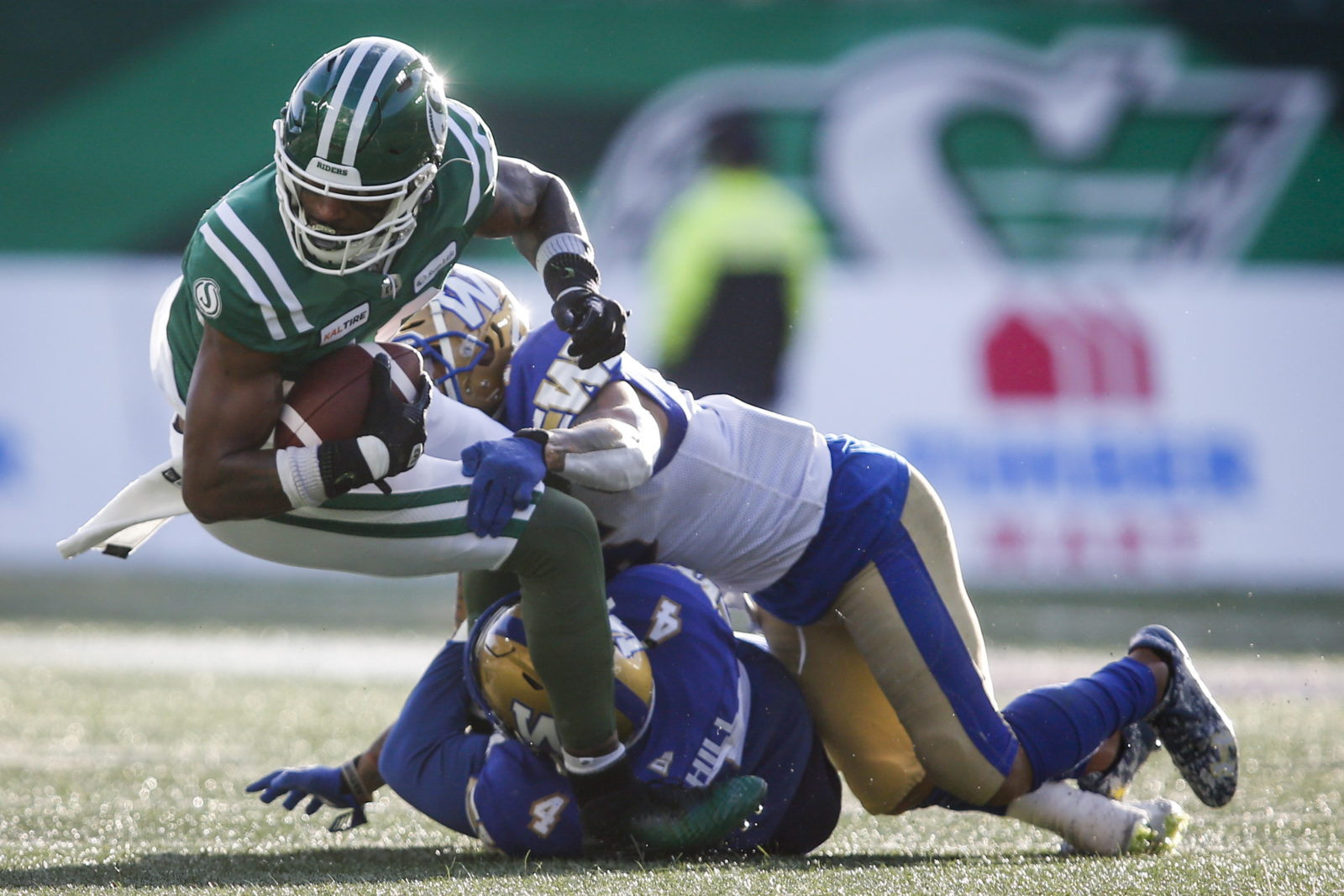 On the first, Jonathan Kongbo sacked Brian Bennett – in the game for Cody Fajardo – on a second-and-one from the one with 11 minutes remaining.

And in the second situation, the Riders were first and goal from the Bombers’ three-yard line, with Fajardo throwing an incomplete pass on first down as Willie Jefferson pressured him to get rid of the ball quickly. On second down, Thiadric Hansen stood up William Powell at the one-yard line to prevent a score. And on third down, Fajardo looked for a crease on the right side of the Bombers’ defence but was swarmed by Mercy Maston, Adam Bighill and Brandon Alexander.

“Just being from Saskatchewan and playing there, it just meant so much more for me,” said Bombers guard Pat Neufeld, a Regina product and former Roughrider. “That game, that win, was amazing. I just remember how insanely good our defence was. Those goal-line stands were incredible.

Interestingly, in the week leading up to the West Final it was Bighill who approached defensive coordinator Richie Hall with a suggestion for a change to their short-yardage scheme that would allow the linebacker to track the quarterback and be a hammer from the second level.

“I’m thankful we had the conversation,” said Bighill. “One thing that’s great about Richie, he’s always been great about taking feedback from players and listening. You look back now and, wow, it really made a difference for us in the playoffs.”

Critical up front on the third down was the work of defensive tackles Jake Thomas and Steve Richardson in preventing the Riders O-line to get leverage, and while Bighill, Maston and Alexander made the decisive tackle, Nick Taylor also exploded into the fray to cut down Riders receiver Manny Arceneaux, who had lined up on the left side to beef up the blocking on that side. 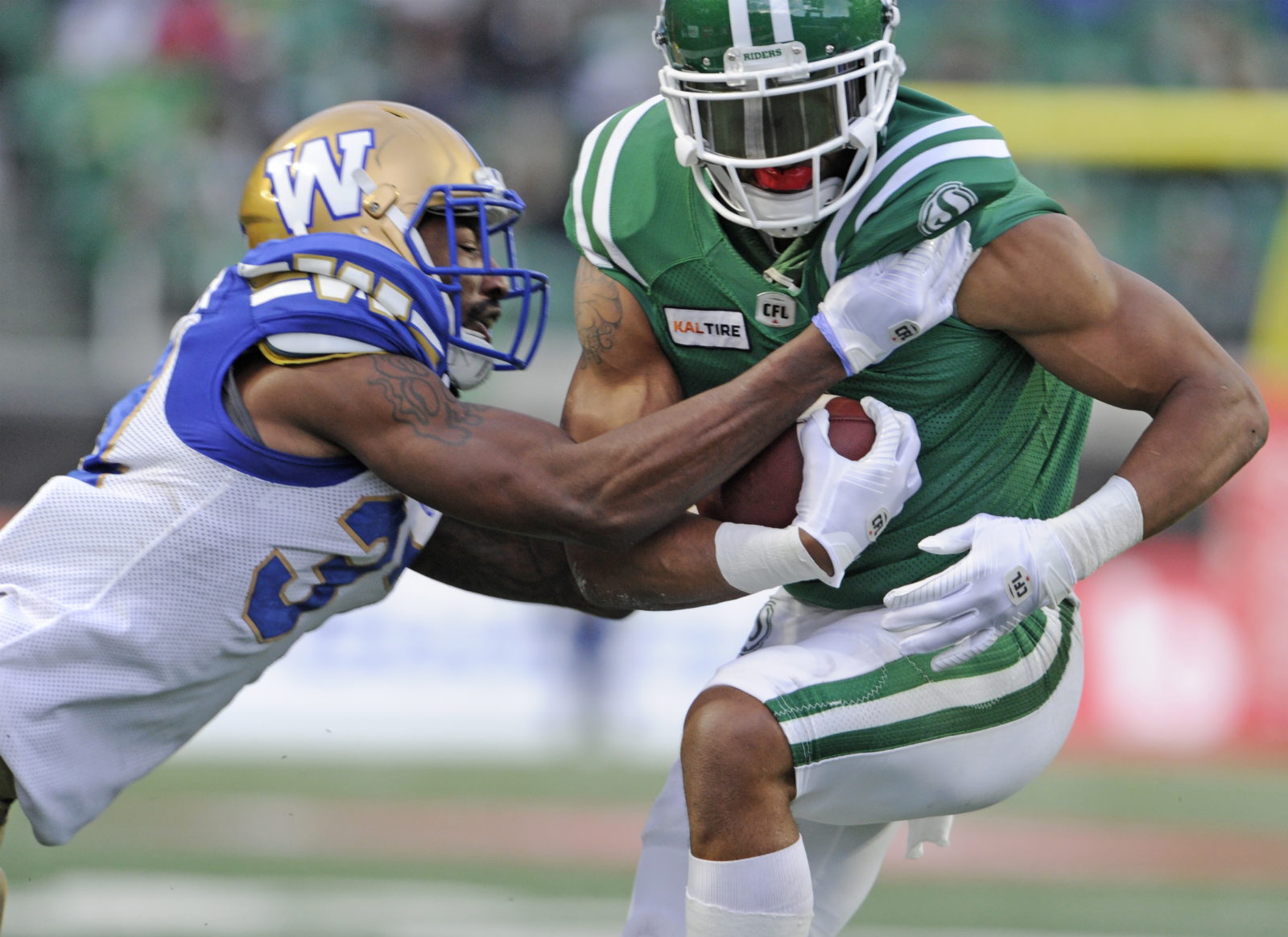 “I remember earlier in the quarter I had messed up in coverage and Saskatchewan caught me red-handed,” said Taylor. “They must have seen something on film with me not paying attention to the tight end. (Cory) Watson went flying down the middle of the field and I HAD to make the tackle because it was my fault (after a 45-yard gain). I saved a touchdown on that play, but it was my fault.

“So, I wanted to make up for it. On that goal-line stand… I saw the ball go off and I just submarined down and I got into his knees and was able to push him back. That helped wreck the play and then everybody else was there to finish the play off.

“It was a quarterback sneak and you’re just wishing for the best and it happened to work out.”

“We talk about team defence all the time,” added Hall. “The people that really helped make the play were Mercy and Nick because of the penetration and the leverage they had to force them outside.

“We talk about run defend requiring 12 people, not just the front seven. We made a little change to our goal-line or short-yardage defence… it was something new. Biggie was a flow guy. They had great penetration and the little guys on the edge came and sealed the edge and he didn’t have anywhere to go.

“That was a big momentum factor for us and deflating for them. They were down there twice and couldn’t get in there.” 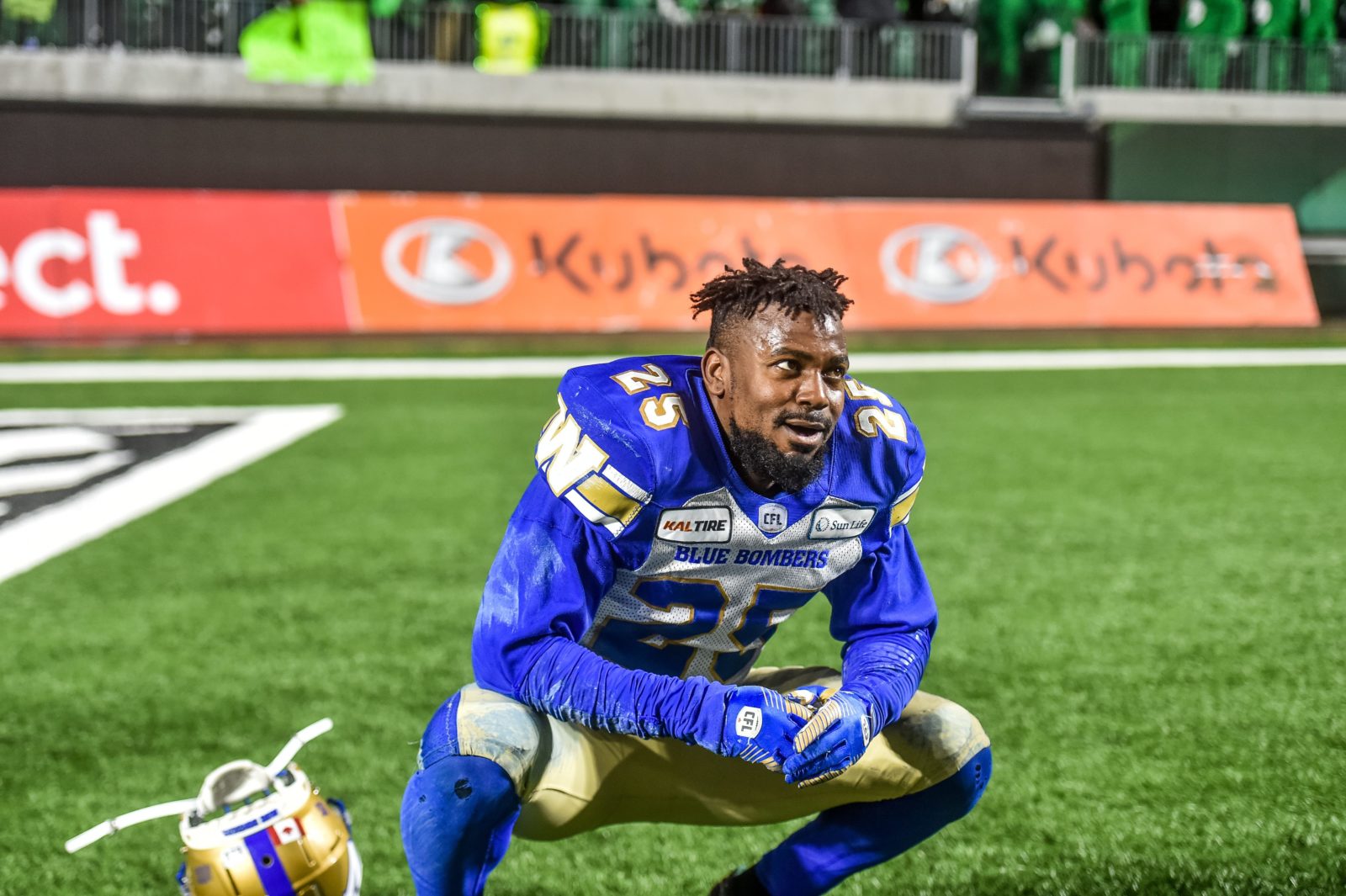 Three plays in short yardage from the Bombers’ three-yard line and no points scored. And, again, it was all about how so many stepped up to help paint the defensive masterpiece.

“The favour is always on the offensive side. However, I’d like to think our defensive line definitely moved the favour to our side. Those plays, they’re just so demoralizing for an offence.”

Bighill paused for a moment, and you could just feel the smile forming on his face.

“And on the other hand,” he added, “those plays are absolutely uplifting for the defence.”