It was a massive moment in a monumental game positively overflowing with so many of them.

Yet, even to this day – almost a year removed from the Winnipeg Blue Bombers victory over the Saskatchewan Roughriders in the 2019 West Final – it’s also a play which sometimes gets lost, especially when stacked up against the goal-line stands, the touchdown throws, the turnovers and a pass clanging off the crossbar as the clock hit zeroes.

Still, in the immediate aftermath of the Bombers’ 20-13 victory, there was Bombers head coach Mike O’Shea specifically referencing a fourth-quarter tackle made by linebacker Shayne Gauthier on a punt return as absolutely pivotal.

That moment, one in which Gauthier brings down Nick Marshall after the Riders fooled the Bombers on some deception, comes in at #5 in our ’10 Plays That Made A Champion’ series.

Interestingly, the Riders’ ruse on the a play would look familiar to Bombers fans, for the club ran the exact same deception with Maurice Leggett for a 97-yard touchdown in the 2018 Banjo Bowl.

“It was exactly the same play and I was on the field when we did that, too.” began Gauthier in a recent chat with bluebombers.com for this series. “Coach Bou (Paul Boudreau, special teams coordinator) told us about it during the week, that they were going to do something to us. We had actually looked at the play we did against them during the week to remember they could come up with that kind of play during the game.”

Still, even with the warning the Bombers very nearly got caught with their pants down in a critical moment of the West Final. Justin Medlock had lofted a cross-field punt to Nick Marshall, but the Riders set up their blocking scheme to the opposite side, drawing the Bombers’ punt-cover unit to Marcus Thigpen.

When Marshall pulled in the punt at his own 15-yard line, the closest Bomber – Kerfalla Exumé – was at least 10 yards away and heading in the wrong direction before he realized what the Riders were up to on the return.

“As soon as I saw it I was like, ‘Ohhhhh….’ I was just screaming,” said Medlock after the game. “That was a tough.”

Gauthier, meanwhile, was at least 30 yards away and on the opposite hash marks.

“It’s a lot of ground to cover,” said Gauthier. “When I turned my only thought was, ‘You gotta get there no matter what’ and I just started running. I saw he had two blockers in front of him, but I think they didn’t account for me because I was so far away.

“I’ve watched the play I don’t know how many times, but I think both of their guys saw Jesse Briggs who was closing on Nick Marshall and they both tried to block Jesse. Then I came in front of Jesse out of nowhere and I had the perfect angle and speed to catch Marshall from behind. It was like a movie in my head.

“It’s tough,” Gauthier continued. “Obviously, you really don’t want that to happen. I’m so happy we had actually done that play before ourselves, because if we hadn’t and I hadn’t lived it once already I don’t think I could have reacted fast enough to catch him.

“While I was running I remember having a little flashback and it was like, ‘Oh s—t, this is happening against us right now.’” 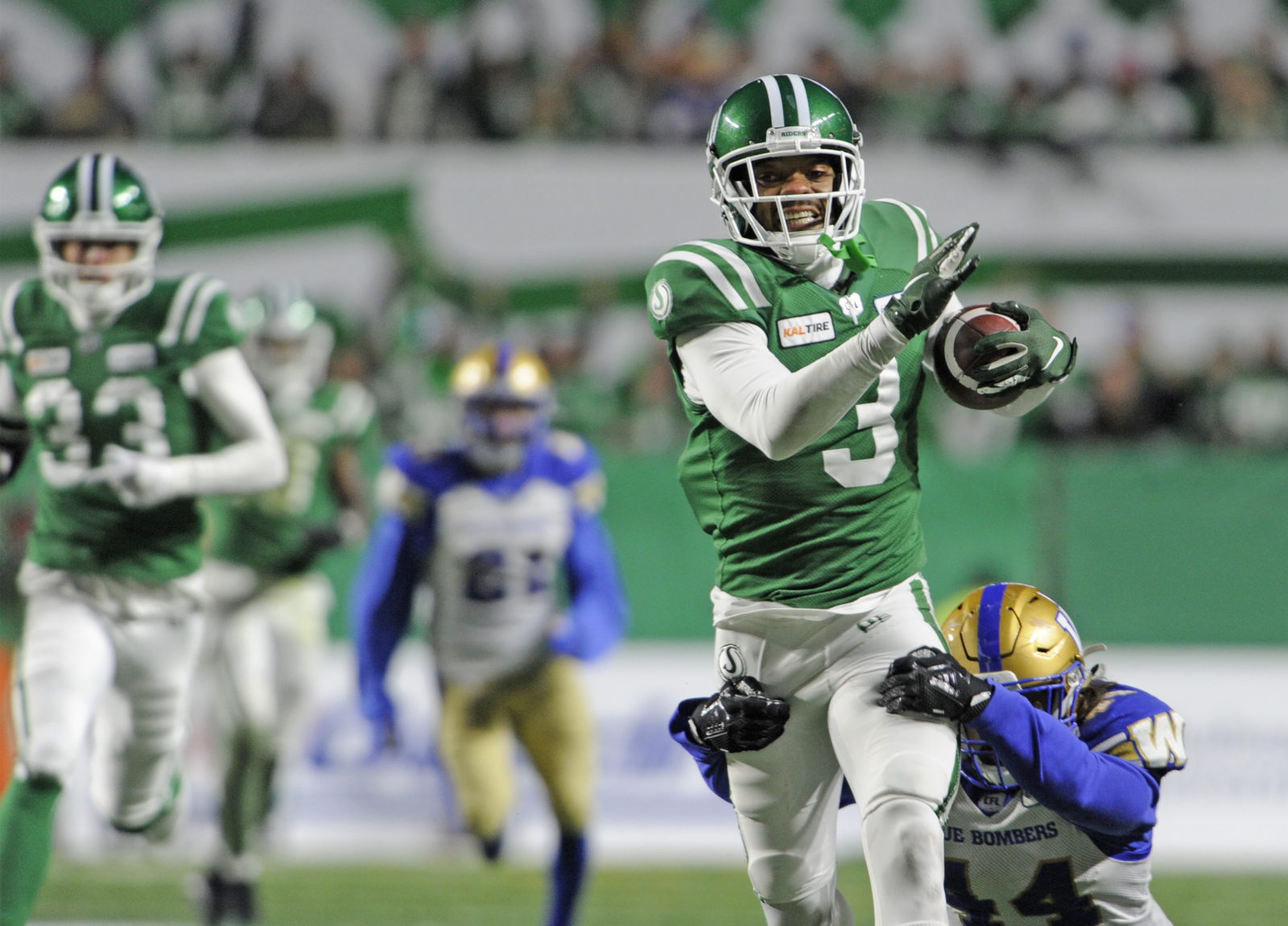 Gauthier raced across the field and tracked down Marshall, pulling him down at the Bombers’ 37-yard line and not only limited the return to 58 yards, but saved a touchdown. The Riders still marched down to the Bombers’ one-yard line, but Cody Fajardo was stuffed on a third-and-one from the one with 2:37 left to preserve Winnipeg’s 20-13 advantage.

But the defence doesn’t even have the chance to defend their goal line if not for the Gauthier heroics – a play that O’Shea, a special teams aficionado, appreciated in the moment even if it was lost amidst the zany end to the West Final.

“You want to talk about any particular play in this game, talk about Number 44, Shayne Gauthier, running down a returner who’s got a lead on him and securing a tackle and preventing a score,” O’Shea said. “That’s as big a play as you’ll ever see.”

It wasn’t until later in the Bombers’ locker room and after many had seen the video clip of the play to understand what the Riders were doing and how Gauthier snuffed it out, that the veteran special teams player began getting some love from his teammates.

“All the players were so into the game at that point… I got a lot of reaction to the play after because it was so intense and we were so focused on winning,” said Gauthier. “But afterward so many came to me and told me how big that play was.

“That’s the greatest play of my career. I mean, as a special teamer you never see me. Making a play like that in a situation like that… you have to be prepared and I was prepared for that moment. My whole football career I’ve made those kind of plays, just not that important. Even in university I took pride in making those kind of special plays that the team needed in important moments. That’s what helped make me a CFL player.”

Not every player scores a game-winning touchdown or strip-sacks a quarterback for a turnover. Few get to kick a clutch field goal or stuff a hole with a vicious tackle to end a drive.

“The guys on special teams, we just want to do our job,” said Gauthier. “It’s not a job that gets a lot of attention. But I’m going to remember that moment my whole life.

“I’m jogging back to the sideline and Coach O’Shea said to me, ‘That’s one of the greatest plays I’ve seen on special teams.’ To hear that, especially from Coach O’Shea… I don’t know how to say it, but I’ll always cherish that he said that to me. That means everything to me.”